Coral Sands is located on Harbour Island, which is 50 miles east of Nassau in the Bahamas. The nearest airport is North Eleuthera International, which is approximately 15 minutes from the hotel. When you arrive at North Eleuthera Airport, it’s a five-minute taxi ride to Harbour Island. From there, it's a ten-minute water taxi ride to Dunmore Town, and from there, you grab a taxi for the five-minute ride to Coral Sands.

From within the United States, Coral Sands is accessible by air from Miami and Fort Lauderdale (Florida) and Nassau (Bahamas) with daily, direct flights via American Airlines and United Airlines. From Europe, British Airways flies direct from London to Nassau. From Nassau, it’s a 20-minute flight to North Eleuthera. Carriers include: Bahamas Air, Pineapple Air and Southern Air Charters. An alternate option is the “Fast Ferry,” which takes about 2-1/2 hours each way. The ferry travels daily between Nassau and North Eleuthera. It departs from Paradise Island and arrives directly on Harbour Island.

The nearest airport is North Eleuthera International (ELH), which is serviced from Miami, Ft. Lauderdale and Nassau.

From the United States, connect via Ft. Lauderdale through United Airlines or Miami through American Airlines. There are a couple of flights a day. North Eleuthera is our local airport and is approximately 20 minutes from the hotel. Getting from North Eleuthera Airport to Coral Sands involves taking a five-minute taxi ride to the dock, a five-minute water taxi across to Harbour Island and then another five-minute taxi ride to Coral Sands. Each stage costs $5 per person. Transport is always available.

From Europe, British Airways flies direct London to Nassau, and then we recommend connecting on a 20-minute charter flights from Nassau to North Eleuthera. So guests do NOT need to overnight in Nassau.

There is a fast Ferry that leaves Nassau daily for Harbour Island, please visit http://www.bahamasferries.com/ for times and reservations. 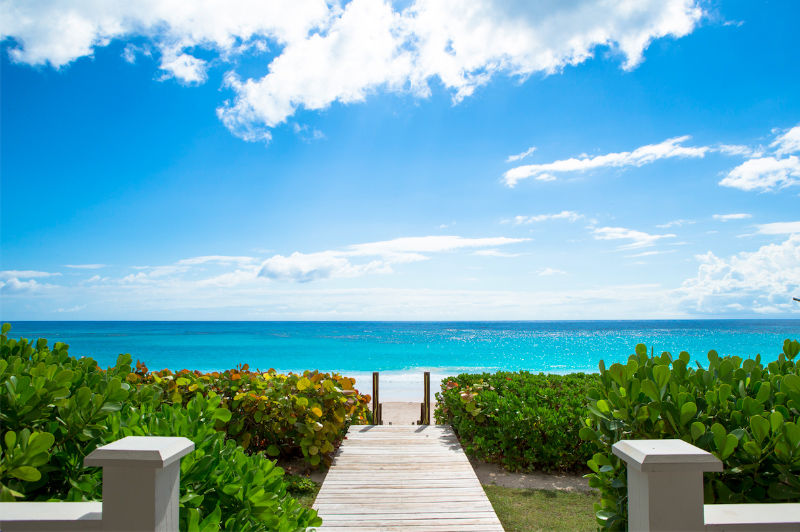 Featuring the artistry of architect William Tagland and world-renowned interior designer Barbara Hulanicki, each of these cottages is one of a kind.

Sea Oats and Beach House are the ultimate beach retreats. Luxurious and spacious, each cottage has two complete colonial-style master bedrooms and gorgeous, spa-like designer bathrooms. There’s plenty of room to languish and linger in the stylishly appointed living and sitting areas. Each one unique unto itself, these cottages are perfect for families and friends traveling together. Sea Oats and Beach House bring a whole meaning to the phrase “a day at the beach.”